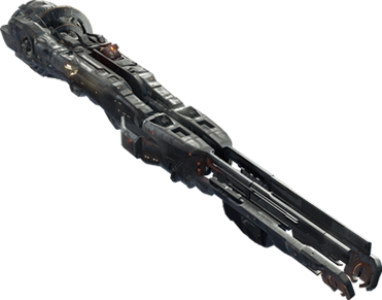 The Artillery Cruiser is one of the Assault ships in the Dreadnought Universe.

The Artillery Cruiser is the most vulnerable ship in the fleet, but none can match its destructive power. Each Artillery Cruiser is equipped with a long-range rail cannon strong enough to destroy enemy armor from miles away. Shift Energy to weapons to decimate enemy ships with several well-placed shots.

NOTICE:Abilities are customized.It depends on how you want to play.The most known are:

Redirects all energy to the main weapon, increasing weapon firing rate but leaving no energy for thrusters.

shooting with lasers to the enemy incoming missiles